Charmingly honest, Kelly & Cal is one of those rare films which is uplifting and at the same time desperately human. Stand-out star Juliette Lewis is Kelly, once a rock and roll queen, she is now a new mother and settled down to a suburban housewife lifestyle.  Bored and increasingly resentful of her undesired confinement, she encounters Cal (Jonny Weston), who, following an accident, loses his legs and is confined to a wheelchair.

Both once huge, creative and life-loving characters, Kelly and Cal are bought to despair by their situations until they begin spending time with each other in Cal's garage-turned bedroom, pouring over vintage rock and roll magazines and listening to music.  The two outsiders form a friendship which is funny, touching and full of delight until their own relationship becomes compromised.  Both Lewis and Weston are astounding, the easy chemistry between them light up every shared scene and bring an incredible energy to a story which has real heart. 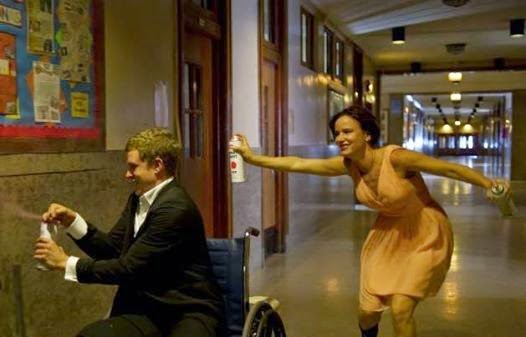 I met Jen at the London Film Festival and found out more about how she made this project happen:

This is your first feature film.  What lessons have you taken from the experience of making Kelly & Cal?

I’ve gained so many lessons! Good work will be responded to was my key lesson. You just have to take the leap and trust that the audience is out there, and you have to do the absolute the best you can and everything will connect.

The role of Kelly seemed to have been written for Juliette.  How did she become part of this film and did she bring a lot to the role once she was cast?

I went to USC for graduate school and the writer of the script also went to USC. We met through their alumni programme and I always had Juliette in mind as our model Kelly, but we never thought we would get her as she took time off to do her music (6-7 years). However the year we started looking for actors she started to come back to acting and the timing was just right, we made her an offer and she responded to the script.

Both protagonists are eager to live in the present, but can't get over their pasts- what do you think that the main messages are within the film?

I’m a very forward looking person, I don’t like contemplating too much or getting stuck in the past, I’m very much a “let’s go next” person and I think you can see that when people get stuck, it can take over their whole lives. And I think this film shows what happens when you’re holding on too tight to something and life is moving on.

Have you got any advice to filmmakers looking to make the move from short filmmaking to feature?

They need to find material they love, commit to it, do the best they can, make the best decisions they can, get it made and then move on. Don’t dwell on the past!