Berlinale 2015 Review: Every Thing Will be Fine 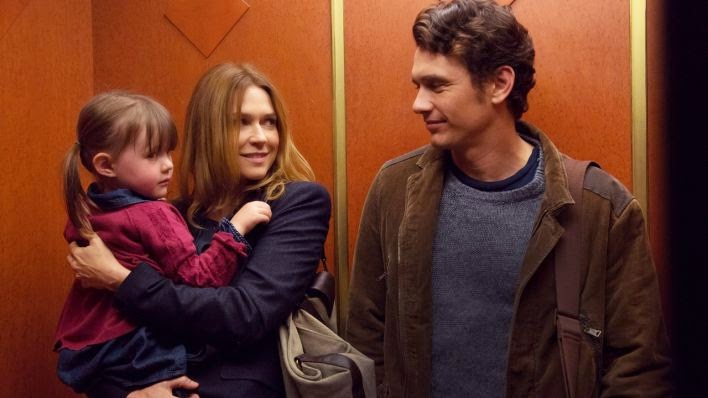 Sometimes a film comes along, plodding up behind you.  You think you can hear it with its soft footsteps, it's mainstream cast, a familiar sounding genre... only it's a lot closer to you than you thought and before you know it, it's got you. It's taken you by surprise, it's won you over, it's impacted your day and made you feel alive.

I saw 'Every thing will be fine' at this year's Berlinale.  It came at the tail end of a whirlwind day full of press calls, meetings and running across the city to make screenings you know you're always going to be ten minutes late for.  I sank into the soft surroundings of a very small, but homely screen.  'It's a Wim Wenders film' they tell me.  They give me 3D glasses, and a press pack.  I see James Franco and Charlotte Gainsbourg's names on the cast list and feel vindicated.  At the very least, I get to relax and watch a couple of first-rate actors.  The screen glows white, with snow.  I put the glasses on and watch the flakes fall softly onto my lap.

The film is a stunning piece of cinema magic, unlike anything I've ever seen. Tomas (Franco) is a struggling writer, spending his days in a world of piled snow, waiting for inspiration.  He's established, having written two books already, but he can't get the inspiration needed to follow through. He has left his home, and his partner (a confusingly- accented Rachel McAdams), and seeks solitude in a shack near Oka, Quebec.

One fateful morning, Tomas gets into his car and starts the drive to mainland.  What follows is a shocking scene, he causes a crisis, but the audience are taken completely aback by the calmness of how the shots are set up, how they unfold.  Thomas is at first unaware of what has happened, and we sit helpless as we witness the last moments of the character's easy going nature and his relaxed smile.  From now on he is broken, complicated, quiet.  'It was an accident' everyone insists.  Tomas falls to sleep in his car, muttering the words.

It's better for his writing. The new-found pain and confused grief burns a fire of passion in him. He disappears, he tries to escape. He thinks often of that fateful day.  The character impacted by the events, Kat (Charlotte Gainsbourg) is a marvel, her grief mirroring his as they mourn separately. The film skips forward two years and everyone has changed but them.

The pace of the film is perfect.  Wenders is a master of seasonality- the film feels circular as the years change, reflected in the seasons which divide the film into four parts.  The cinematography is always stunning, softly lit, a homage to a landscape that deserves to be fallen in love with.  Thomas goes back to the scene of the incident and meets Kate.  The dialogue seems right, a conversation two people would seem to have in such an impossible circumstance.  What is so surprising perhaps is the underlying feeling of hope throughout the film.  You stick with Tomas, you watch the seasons change, you see him grow.  Due to Franco's quiet but powerful presence, you never give up on him finding peace at last.