Girltrash: All Night Long is a lesbian pop-punk infused feature-length musical.  Yes, I'm serious... and it's absolutely crazy, unique, trashy and... awesome.  For those who didn't know about the popular webseries Girltrash!, written and directed by Angela Robinson, it's an introduction to the world of LGBT band members Daisy (Lisa Rieffel) and Tyler (the absolutely perfect casting of Michelle Lombardo) and their surreal night attempting to get to their evening show at the local Band-slam competition. 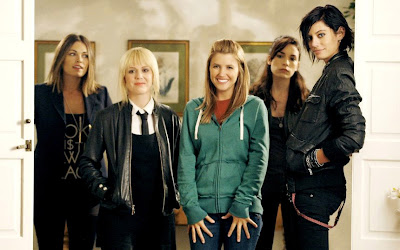 Ecstatic that their big chance has finally come along, self-confessed 'fuck-ups' Daisy and Tyler start making plans to make it the best show ever, only fate intervenes to take them on a whirl-wind night of drama and near-misses, which, littered with musical numbers, turns into an alice in wonderland-esque fall into an underground tour of LA... drugs and all.

Far from becoming a cliche teen musical, this film achieves cult status purely because of the visceral energy from the cast and the frenetic energy that they add to the narrative, so that the audience are constantly guessing as to where the night will take them next.  Reminiscent of 90s high school movies, we are able to delve into the protagonists worlds with little effort and much entertainment, even if you had yet to meet the central cast before viewing the movie.

The music is clunky to begin with, but adds to the charm, so that by the time we reach the half-way mark of the feature it's a welcome addition to the story.  Pop-punk has never been so sweet and fits in with the overall aesthetic of the piece, with lyrics that seem outrageous yet relatable, a comedy that becomes significant for it's audience as it hits home for outcasts across the pond.

So, I'm about to lose a few weeks of my life catching up with the webseries.  Who's with me?!