LFF Review: The Lady in the Van 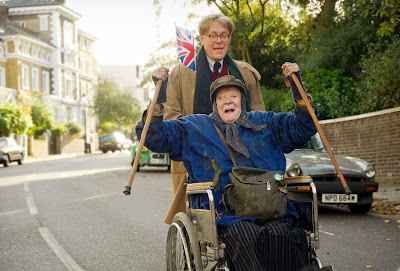 Quintessentially British and deliciously funny, the cinematic treatment of the much-loved play by Alan Bennett, The Lady in a Van, is a welcome addition to the London Film Festival. Dame Maggie Smith is unabashedly brave, wilful and witty as Miss Shepherd, the Lady wreaking havoc on Bennett’s life (it’s based on a true story believe it or not!) but a tentative friendship is shared between the two characters as Bennett begins to draw parallels between Miss Shepherd and his mother, even admitting that ‘these old women seem to be my niche.” Women are indeed his forte, as made evident by Bennett’s early works- including the infamous Talking Heads monologues which feature within this film, but in this piece, Bennett truly excels. He creates a protagonist of such extreme complexity that both he and the audience have the fun of attempting to piece together Miss Shepherd’s life. A pianist, former nun, a vagrant with the unmistakable air of nobility, Miss Shepherd is treated, nonetheless, with a graceful humanity, a character who will stick with you, much like it did with the residents of Gloucester Crescent.

Maggie Smith has enjoyed a prolific career on both the stage and screen, with her recent role of Lady Violet (Downton Abbey) dominating popular culture at the moment.  When asked about her new role in the The Lady in a Van, Smith answered, “I feel easier with the lady in the van, than the lady in the hat.  Miss Shepherd doesn’t mind how she looked or appeared to other people, which was such a relief!  For comfort alone, it was preferable to be Miss Shepherd.” The film’s discourse centres around the theme of ‘home’ and what it means to not have one, although Bennett insists that letting this character park in his drive way for 15 years wasn’t out of the kindness of his heart. “I would work at my table, facing out onto the street” he told us.  “One day I let her park on my driveway so that my view wasn’t blocked by her van anymore…If she goes into the garden, then she was out of my eye-line and I could work…so it was the opposite of compassion, I was just keeping her out of the way!”  Well, she stayed for 15 years, not only becoming a well-known figure in Camden, but now across the UK as the film version gets a release in November 2015.