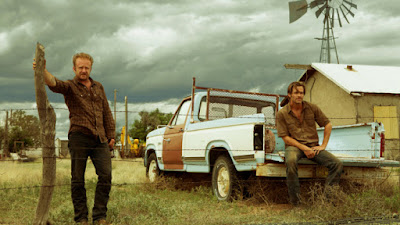 From David Mackenzie, the director of the gritty but brilliant prison-movie, Starred Up, comes the modern day Western Hell or High Water.

Following years of struggling on the poverty line, Texan Toby Howard (Chris Pine) has devised an elaborate plan to steal from the very banks that have driven his family into debt.  Keen to pay off his mother’s mortgage on her ranch and provide a better future for his estranged children, he enlists the help of other brother Tanner.  While Toby is the detail-orientated, reluctant criminal, Tanner is all too happy to be involved; newly-released from prison he throws himself into the heist like it’s his favourite game and he can’t believe that he gets to play it with his brother.  The small-town robberies attract the attention of Sheriff Marcus Hamilton (Jeff Bridges), who is about to retire but cannot resist solving one more case.  As the robberies continue, the cat and mouse chase takes centre stage in this intelligent and stylish thriller.

The genius of Mackenzie’s early films lie in his ability to carve out nuanced and meaningful performances from his cast, subverting any preconceptions that the audience may have as he slots them into his worlds.  It is no different here; Chris Pine is a thin, painfully tanned cowboy with oil slicked-back hair, a questionable mustache and a Southern drawl; world’s way from his boyish and clean-cut Captain Kirke. Ben Foster is magnificent and unrecognisable; his transformation to the ex-con, unstable and erratic older brother is a real breakthrough.  Jeff Bridges plays opposite his deputy Alberto (Gil Birmingham, Twilight) and their complicated relationship based on mutual dislike and disrespect is compelling. On the road, the pair squabble uncomfortably, but are ruthlessly joined at the hip.

As both sets of road-buddies make their way to the last town, to the last bank, the audience have already fully immersed themselves in their environment.  With long, langid shots of the the open Texan roads, framed with a sublime soundtrack curated by Nick Cave, we are tortured with the foreboding that the bad guys just don’t win in this genre, but are the bad guys the ones robbing the bank?  The small-minded and myopic Sheriff from another era?  The banks who hold the community to ransom?  Clever storytelling lets the audience decide.

This is the kind of filmmaking that you just can’t shake off for a while; a slow burner that gets under the skin.