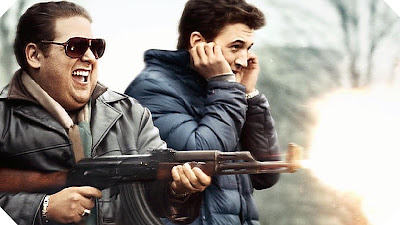 It was welcome news when Todd Phillips of The Hangover fame announced that he had a new project up his sleeve.  His films are hilarious, colourful and outrageous, but they often stretch beyond what Hollywood comedies offer us.  They surprise; they intrigue; they present an out-of-this-world twist after twist.  They are also unapologetic in their immaturity. War Dogs is his latest, and most mature film to date.  With a writing, directing and producing credit on the film, Phillips obviously believes in it, and its hard not to see why. Mature and divisive it is; but its also sprinkled with the characterisations, joy and comedy that we have grown to love from Phillips.
The film is based on a real story of two arms dealers, David Packouz (Teller) and Efraim Diveroli (Hill), in their early twenties. Living in Miami Beach during the Iraq War exploit, Diveroli (who already sells guns on the side) latches onto a little-known government initiative that allows small businesses to bid on U.S. Military contracts. They start small, taking “the crumbs of the pie” and begin earning big money and living the high life. But the pair gets in over their heads when they win a huge $300 million contract from the Pentagon to arm America’s allies in Afghanistan, putting them in the path of some very shady people.

War Dogs is not the kind of comedy you’d expect from Phillips.  It’s not a film that will make you choke on your pizza, doubled up with laughter, at the insane goings-on on the screen. It definitely starts out in that vein, as you settle into a familar buddy-comedy narrative with David looking up to Efraim in that puppy dog way we see in so many examples of that genre.  Because it’s based on a real story, it is solid; everything spins on its head and you end up reeling from a film which is actually extremely entertaining whilst also being intelligent.  Sometimes the real story is more unbelievable than fiction and that’s definitely the case here, which makes the film essential viewing. You gasp aloud with what these two get away with; all with a little bravado and Miami spirit.

It’s not preachy; these kids have a lot of money at stake; they’ll do anything for it.  Where do morals come into it?  It’s the real story of the American dream, offering complete freedom and then biting back to demand what it’s owed.  They were the poor kids who made something of themselves and for the first half of the film, you’re celebrating with them no matter what you think of ethics of it.  When they drive through the ‘triangle of death’ in Iraq, you feel as jubilant as they do. Teller narrates, which is a powerful tool as his innocent, rose tinted glasses viewpoint carries the audience with him into dangerous territory.  Hill and Teller are the dream team, and it’s this dynamic that makes this so much more than an average film featuring arms dealers trying to make their fortune from yet another war.  Bradley Cooper’s ‘business man’ Henry Girard cameo is a scene-stealer, and worlds away from his lovable rogue Phil in The Hangover trilogy.

Smart, engaging and powerful; you should see this movie.