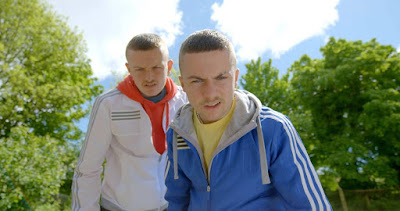 Seating myself in the rather decadent and impressive theatre-turned-cinema of the Haymarket Cineworld on Friday night, I felt a real difference in the atmosphere to the usual sleepy Friday date night vibe that the cinema can have. About to see Irish comedy, The Young Offenders, at the BFI London Film Festival, I was looking forward to something light and cheerful; what followed was the sublimely brilliant and quirky comedy written and directed by newcomer Peter Foott.

Happily, but perhaps surprisingly for a London-based festival, I was perhaps one of a handful of non-Irish patrons in the near enough sold-out screening. As new festival go-oers appeared, others called out to them or waved and each and everyone of them had a massive smile on their faces.  It was party time in screen 1, and I was about to be let in on the secret as to why.

With drinks flowing, and a real buzz in the air, director Peter appeared on the stage, pulling along his young and celebratory cast (Hilary Rose and new talents Chris Walley and Alex Murphy.) A full five minutes passed without a single word being heard above the huge cheers and exuberance of the audience. They were fans, friends and family.  Irish Londoners had come from across the city to catch the opening night of a film that they can all be proud of.  Having already received it's European debut at the Galway Film Festival early this year, and having had it's Irish release last month, critics have been quick to praise the film for it's unflinching and provocative comedy.

Inspired by Ireland’s biggest cocaine seizure off the coast of Cork in 2007, The Young Offenders follows the story of two Cork inner-city teenagers, Conor and Jock, as they embark on a road trip on stolen bikes to find a missing bale of cocaine worth €7 million.  What they are unaware of is that they have a policeman, the hilariously uptight Sergeant Healey (Dominic MacHale) on their tail, keen to discover who is stealing all of the bikes in Cork.  What transpires throughout the film is a road movie meets coming-of-age tale between two friends so utterly clueless yet touchingly loyal, managing to wiggle out of predicaments that include a run in with Sergeant Healey in a village cafe, meeting a murderous and nail gun wielding drug dealer (played by stand-up comic P.J. Gallagher) and learning how to swim (adorable.)

Jock (a pitch perfect Chris Walley), longs to escape his abusive alcoholic father and the restrictions of working class Cork.  When he sees the cocaine seizure on the news, he sees it as a chance to quit small-time robbery and make his fortune.  Conor (Alex Murphy) is also from a single parent family, but has a summer job with his mother in a local fish market.  Foott unflinchingly turns our eye to what Cork can offer them; with is very little for a pair of teenagers who only dream of getting out.

There are hardly any scenes were the humour doesn't take centre stage. It's typically boyish but can also be suprising.  Some scenes are bold music-video paradys of how the characters see themselves, but was such a delight to the audience that i don't begrudge the kookiness.  One scene sees the boys on the run for Sargeant Healey and running into a elderly gentleman's country house, who mistakes them (in his drunken haze) for his sons.  They spend a happy evening drinking beer and watching TV, with Healey waiting outside in the stables. Jock trying to name the four fathers and Conor attempting to work on his customer service skills are other highlights.

What is great about film festivals is that you can end up seeing something brilliant in amongst it all, and for a small Irish movie, it's a great way to reach new audiences.  Peter Foott has made a hit, and now can go on to share a slice of irish life to a willing audience.  Leave your problems at the door, and hustle a ticket to the next screening. It's the delight of the festival and I can't wait to see what the filmmakers and cast do next.