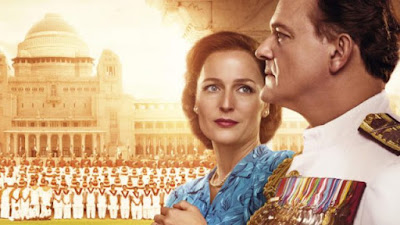 Historical drama Viceroy’s House comes across as a heady combination of Downton Abbey and The Crown in the trailer; a stylish and poignant hostircal drama, with romance, intrigue and an upstairs-downstairs approach to goings-on in an opulent house complete with over 100 staff. Following the appointment of ‘Viceroy’ of India, Lord Mountbatten of Burma (Hugh Bonneville) and his wife Edwina (a pitch-perfect turn from Gillian Anderson) arrive in India tasked in bringing about a peaceful independence from the United Kingdom rule.

Bonneville as Mountbatten (who was a distinguished cousin of the King) is a charming and likeable character from the outset, dedicated to facing a tumultuous event; the bringing together of the key political figures in India (Mahatma Gandhi and Muhammad Ali Jinnah are just two) to induce a peaceful and united Indian rule. Armed with a whip smart wife, they start making changes to the house which, although seem small, are huge deals for the servants; they want more Indian cuisine cooked for dinners, they speak to their servants and ask them about their lives. “We’re giving a nation back to it’s people. How bad can it be?” asks Edwina, a bad sign if there ever was one.

Throughout their first month, the political tension between the Hindu and Muslim leaders simmers in Mountbatten’s meeting room, which is echoed in the relationships of the servants downstairs. Mountbatten is pressured hugely by his team of advisors, which includes a sinister General Hastings Ismay (a bold turn from Michael Gambon), to agree to a partition plan to give the Muslims their Pakistan, which includes some key regions of India. We actually view most of these meetings with the servants, as they put their eyes to the keyholes and try to decipher what their future will look like. “Without peace, all other dreams vanish and reduce to ashes” quotes Edwina, the steady voice of reason throughout the film. “We came to give India it’s freedom, not to tear it apart.” But, as the history books tell us, that is what happened, bringing about the biggest human migration in history.

This film is not about criticising Lord Mountbatten, rather works to provide an explanation of how these events came to be. Director Gurinder Chadha has created a very watchable costume drama from India’s history, and does so in an enlightening way. Unfortunately a lot of the film revolves around a pretty luke-warm relationship between a beautiful Muslim servant Aalia (Huma Qureshi) and handsome Hindu Jeet (Manish Dayal), who are consequently forced apart by proceedings. A lot of the pace is lost focusing on their desire to be together against all odds, which is only ever rewarding to the audience in it’s final scenes, where we glimpse some real passion and heart.

What does work is Chadha’s deep desire to bring to light the sheer scale of the suffering following the partition; endless lines of refugees seeking sanctuary in both Pakistan and India, evidence of the bloodshed and desperation of broken families. Along with the mass migration, there were brutal attacks on both sides and whole villages wiped out. Chadha shows her grandmother, the inspiration for making the film, before the credits, and this is the real lump-in-throat moment. The romanticism of a beautiful post-war India is effectively lifted with real stories of heartbreak and struggle.
Reactions: