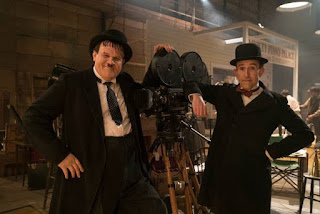 Stan & Ollie was destined to cause a lot of buzz; the film tells the story of comedy greats Laurel & Hardy, and closed the 2018 BFI London Film Festival to great critical acclaim.

The film is absolutely magic. It's easy to forget that you aren't seeing the duo back on the big screen in the opening, as Coogan and Reilly joke around before their famous dance on a Western cowboy set in Hollywood; captured on fuzzy black and white film. In 1937, the stars were the biggest names in film throughout the world. We don't focus on their booming film careers of the Golden Age but fast forward to 1953. With fading popularity, and the hopes of having a film produced, they agree to a tour of variety halls in Britain, starting in a rain-drenched forgotten B&B in Newcastle.

The two had different priorities early on in life - Laurel was incredibly driven and hated not owning his own material (the pair were under contract with their studio during their film career) whereas Hardy was content with his role as an actor and a steady wage. Eventually Laurel left the studio and hoped that Hardy would join him, which didn't come to pass. After many years apart, the two have to bond again on a tour spanning over a month before they hit their last destination - London's West End. Now in their 60s, they aren't the youthful actors from the world of vaudeville anymore but they still have that certain 'je ne sais quoi'. Watching the pair come back to life on stage is an absolute delight. The first few venues are empty bar a few who still remember them and the sad truth comes to light - they aren't at the top of their game anymore. But bringing joy and laughter to the world was their strength and if anyone could make a come back, it surely would be they.

Coogan and Reilly were born to play together, that much is certain. Reilly, in full prosthetic make-up and fat suit, is Hardy - the unmistakable twinkle in his eyes. Coogan inhabits the little quirks and nuances that made Laurel so charming on-screen. It's in the close-up scenes off-stage that the pair really get the chance to inhabit their roles; the film is a love story between Laurel and Hardy and the partnership that they enterred so many years ago. With Hardy's health in jeopardy, and Laurel's commitment to see the tour through, the pair conjure scenes that are both heartbreaking and joyful; making Stan & Ollie a magnificent film and study of great comedic and dramatic acting from both leads.