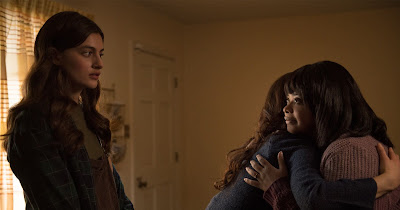 Blumhouse productions, founded by Jason Blum, has become renowned for making low budget horror movies that change the zeitgeist and, usually, appeal to an audience more mainstream than the normal horror crowd. Following films like The Purge, Happy Death Day, and the incredible Get Out and Us, they present Ma, a suburban thriller-psychological horror hybrid.

Octavia Spencer stars as ‘Ma’ or Sue Anne, a lonely woman who befriends some local teenagers, opening up her basement for them to party. Her rules include one of them staying sober to drive the others home and they don’t tell anyone that they come to her house. And don’t go upstairs…

All seems innocent until Ma starts getting interested in the kids' lives to the point of obsession. Flashbacks tell Sue Anne’s own story of what life was like for her at school, and we start realising that her intentions aren’t as innocent as they first seem. Maggie (Diana Silvers), the new girl at school, is the only one to start picking up on the weird vibes, and starts keeping a close eye on her.

Octavia Spencer is brilliant as Ma. She clearly relishes the chance to play someone who isn’t as sweet as she seems - although her doe eyed smile keeps you enchanted throughout. The cast boasts Juliette Lewis and Luke Evans as parents and Allison Janney as Sue Anne’s boss, who all clearly wanted to work with Spencer and didn’t mind taking on small supporting roles. The script seems a bit timid and uncertain of what it really wants to achieve - the horror part of the film is reserved for the end of the third act with the build up lulling you to the point where you actually forget it’s meant to be a thriller and start enjoying the suburban teenage drama. The age old tropes of ‘don’t go up the stairs’ and ‘get out of the house’ are a bit tired but still raise some hairs.

The best thing about the film is how delightfully ‘B-movie’ it is. The epic soundtrack and references to John Hughes movies start making sense, this is really a high school movie meant to scare kids out of drinking too much in a strangers basement. It is however hugely enjoyable; the cast is ace and do their best in carrying a film where not a lot happens and yet is still surprisingly entertaining. It’s definitely one to see on a Friday night at the cinema.