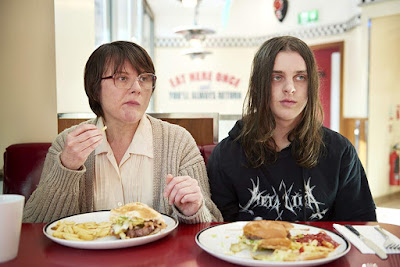 Based on a graphic novel (which I must immediately seek out and consume), Days of Bagnold Summer is a brilliant coming of age story. Daniel is a bored teenager in the suburbs living with his librarian mother, Sue. As Simon Bird’s directorial debut, it’s his chance to show his filmmaking style and the kind of projects that he wants to make going forward. At the London Film Festival screening of the film this week Bird joked that he’d chosen something that wasn’t too expensive to make, but I’d argue that this is a complex film; its complexity lies more in the humanity of the narrative and not its production values. Put simply, it’s an entertaining film. The mother-son relationship is hilarious and, at times, really provoking. We see someone we know in each character. Nothing really happens in the film, but at the same time everything shifts during this one summer.

Earl Cave plays Daniel, with long greasy hair and a diet of white carbs. His summer in Florida with his dad has been cancelled at the last minute, and a long six weeks spent in his house with his mum stretches ahead of him endlessly. Wearing a Metallica hoodie, he walks around the quiet town slowly, handing out CVs in the hopes that he’ll get a summer job. He soon gives up and returns to the house, to stare vacantly at the TV screen. There’s a lot of this, but it isn’t dull. Cave doesn’t just bring angst to Daniel, but a vulnerability too. A shyness that he hides with his black nail polish and baggy clothes.

Sue is played by the utter genius Monica Dolan, all lip quivers, wide nervous eyes, pastel outfits and ‘mumsy’ hair. Her life seems simple and beige - a kind of death by suburbia - but drama bubbles beneath the surface. Daniel blames his mother for his dad leaving, Sue shrugs off Daniel’s mean comments but shows glimpses of how she really feels. In one scene which treads a careful line between heartbreaking and darkly funny, she breaks down during a Reiki healing session given by her hippy neighbour, played by the comedy queen Tamsin Greig. At one point she asks Daniel if he wants to go to the seaside with her. It’s a real effort to spend quality time with her son, and her frustration is palpable. She feels alone and afraid as Daniel struggles to engage with her. Their relationship is fascinating throughout; Bird choosing to be sympathetic towards both characters.

It feels at once nostalgic, and also very contemporary. It also feels extremely ‘British’ in it’s comedy and pace. I would recommend this for teenagers and adults alike - there’s something that we can all learn from it and, as I said in the opening, it’s truly entertaining. Isn’t that what all films should be?