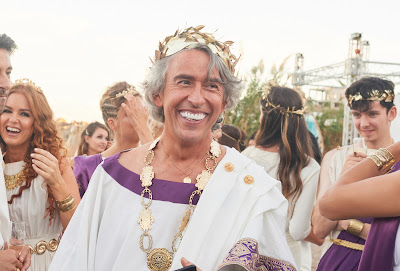 Prolific British writer/ director Michael Winterbottom returns to our screens with a satire about consumerism, consumption and extreme wealth in Greed, which had its European premiere at the BFI London Film Festival last night. Richard McCreadie is a fast fashion magnate; a household name people love to hate, who belittles his staff and drives a hard bargain when making deals. He is also, we learn, a parasite who drives businesses to the ground to pad out his personal wealth and is happy to exploit factory workers in Sri Lanka to keep his manufacturing costs down. Winterbottom once again teams up with Steve Coogan, who, as ‘Greedy McCreadie’ is ostentatious and nasty. Delivering one-liners that are at first hilarious but become worrying as the film plays on and we realise who he really is under the layers; a nasty bully. With a deep tan and the possibly the worst teeth I’ve seen on screen yet, he is celebrated for his ridiculous wealth, despite his effect on the world.

McCreadie is celebrating his 60th birthday with a huge Gladiator -themed party in an attempt to improve his personal PR after a string of bad business dealings. He has demanded that an amphitheater is to be built, a real lion procured for the entertainment and a bunch of A-listers to attend the event in Mykonos. While his workers attempt to create this fantasy, Syrian refugees watch on from their homes in tents on the beach next to their hotel. A stark reminder of the reality we face in the modern world; extreme poverty vs. extreme wealth. A battle of circumstances.

The cast are fantastic. Isla Fisher gets the best lines as McCreadie’s ex-wife. David Mitchell is the writer hired to chronicle McCreadie’s life, allowing us an outsiders view of the family. Asa Butterfield has some great and telling moments as their frustrated son, and Dinita Gohil is an employee who has a personal connection to the workers who suffer in Sri-Lanka. The narrative is quite jumpy, a little messy, but the heart is there and the cast are all more than game.

Winterbottom has made a very entertaining film which feels sadly relevant. It’s a satire which pokes fun at the greed of certain individuals but at the same time packs a huge punch. I found myself laughing less as the film went on, but not to the detriment of my enjoyment of the film. McCreadie is not so far from the figures we know in society, Winterbottom even includes a clip of Sir Phillip Green in the credits as he lists shocking facts about the distribution of the world’s wealth and the average days pay for factory workers in third world countries. It slowly becomes a more uncomfortable watch, but one that hopefully leads to a little self-education for it’s audiences as to what we can do to discourage the utter madness of greed and power of the fat cats sitting at the top.