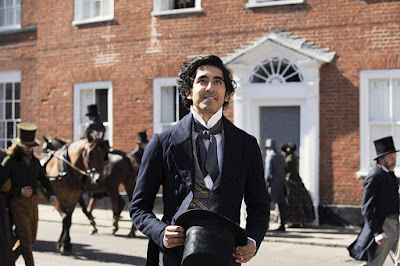 When I heard that Armando Iannucci’s The Personal History of David Copperfield was opening this year’s BFI London Film Festival, my heart skipped a beat. I absolutely love Charles Dickens. Along with Bleak House, the novel David Copperfield is up there as my joint favourite, based on the rich, vibrant characters, the roller coaster of a storyline which weaves it’s ups and downs with a feverish pace and the fact that this is a semi-autobiographical piece which is the closest of Dickens’ novels to let us behind the scenes of his truly beguiling life story.

The all-star cast is a credit to Britain’s love for Dickens and testament to Iannucci’s credibility as a maverick Director. The film adaptation is true to the book, bringing to the big screen Dickens’ special brand of out-of-this-world characters that show just enough vulnerability to ground them in reality.

We see each character through David’s eyes as he memorises their mannerisms, sayings and actions; and where we see him compelled to puts quill to paper, noting them down from an early age, watched over by Peggotty (a wonderful Daisy May Cooper). Words appear strategically on screen as he writes and Dev Patel, as adult David, playfully mimics the characters in a mirror on his desk, jotting down thoughtful and acute observations.He is a reflection of the other characters, but there are hints at his own frustrations, his story is an adventure made possible by those he comes into contact with throughout his life; but he comes himself comes alive on-screen with a power and vulnerable sensitivity that is unique to Patel.

Tilda Swinton is brilliant, stepping into the shoes of David’s aunt, the formidable Betsey Trotwood and following the footsteps of greats who have played her in various versions, including Maggie Smith and Sally Field. Like all Dickens’ characters; you need to look beneath the surface. Each character usually has had to endure their own hardships and struggle long before we meet them. She appears in the birth scene in the opening of the film and leaves in a huff when, in fact, a boy is born, but goes on to play a much bigger role later in David’s life. She adds a natural and believable duality to the role (and watching Tilda pushing her neighbours off their donkeys is something I highly recommend).

The infamous character of Uriah Heep is played with relish by Ben Whishaw, evidently keen to get his acting chops around someone vile for a change; this is definitely not Paddington bear, or geeky Q territory. Heep is the Dickens character that we love to hate, and Whishaw achieves it with gusto.

Hugh Laurie is delightful and ridiculous, getting the best laughs as Mr Dick, Trotwood's brother, but you can't have an Iannucci film without Peter Capaldi. As Mr Micawber, he is sublime and lights up every scene he's in; I found myself sitting up straighter and smiling every time he popped up and eager to hear the latest stories of his family's fate.

This adaptation is solid, mostly through the actors all relishing their scenes and characters. Each story is uncovered slowly throughout the piece; Dickens asks us to not judge at first sight and to have hope that people will show compassion. Some do, some don't, but the joy is in the journey.