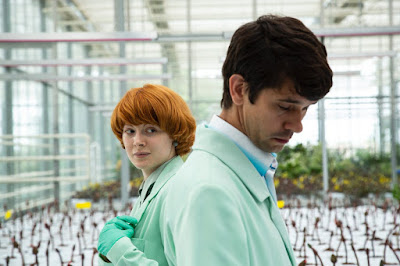 Little Joe, the English-language debut of Austrian Director Jessica Hausner introduces us to single mother Alice (Emily Beecham), a senior plant breeder who has developed a new species, Little Joe, with the assistance of her colleague Chris (Ben Whishaw). She takes one home as a gift for her teenage son, but soon the people around her start acting strangely... A bold, cautionary tale about genetic engineering and perhaps, the expectation of guilt surrounding working mothers.

Little Joe is exactly the kind of film that I’m into. It’s hard to describe (but I’m going to do my best because I wanted to write about it). It’s a film that plays out slowly, it takes it time to build the intrigue and lay down the story but the suspense keeps you on the edge of your seat regardless.

It’s sci-fi and horror, and yet it isn’t. At times it felt like a comedy, others a drama, others a thriller.

The narrative and pace can seem mundane to many but beautifully complex and multilayered to the few.

The performance of the cast is unnerving. They speak in cold, clear voices. It's halting, sometimes awkward and much more like they are speaking out to a theatre full of people than on-screen. Yet it works. They exist with a sterile research facility, with the external world a nondescript city - it could be anywhere. They are merely players against the supporting cast; the vivid, haunting Little Joe plants; emitting their ‘happiness’-promoting pollen to the unsuspecting.

The pastel colour palette is cute and disconcerting. I wanted Alice’s wardrobe of chic shirt and trouser combos, but it also freaked me the hell out.

It’s a film of contradictions but it’s interesting, brilliant and timely. It’s a breath of fresh air. I was able to sit through the whole film and still want more, even though it felt like it took a really long time for something to happen (when in reality it didn’t - the film clocks in and just 1hr 45m. Positively a short by today’s standard.)

That’s all I’m going to say about it - I implore you to watch the film for yourselves if you can. It will be an experience for sure, whether it’s your kind of thing or not. The kind of film I’m pleased people are still making, if only to drown out some of the noise.