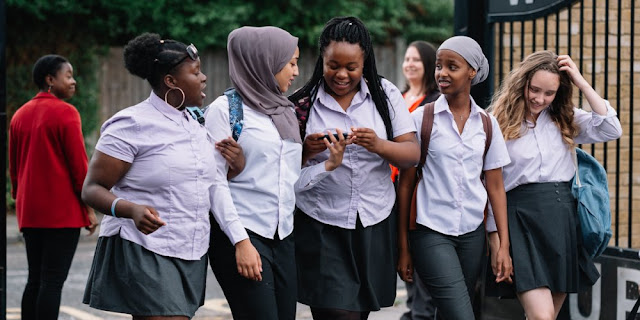 A trip to the cinema is always going to be a joy right now, regardless of what I'm watching. The mere act of visiting an auditorium and sitting down in an old, comfy cinema seat and watching something on a big screen is the thing I most missed (aside from, you know, people) during lockdown. So I was seriously excited to see that my local cinema, Genesis in East London, was open again and that they were previewing a film called Rocks, directed by Sarah Gavron (who I've been a fan girl of since the brilliant Village at the End of the World.)
Written by Claire Wilson and Theresa Ikoko, Rocks follows a group of school-age teenage girls around East London, as they attend school, prepare for family events and hang out on the rooftops of their block of flats.
The first scene of the girls attached to their mobile phones, filming each other singing and messing about against a backdrop of the city, is so natural and so 'East London' (it could easily be a scene I see walking around my neighbourhood) that it feels fully present and fresh. It mirrors the diverse multicultural society we live in, whilst focussing in on a universal topic - that of abandonment, of our sense of community and of family. Its gritty, yes, but highly emotive and powerful. I absolutely loved it.
'Rocks,' newcomer Bukky Bakray, is a 15-year old British Nigerian who wants to be a makeup artist (she has a popular instagram of her work and girls line up for her to do their 'brows in the school yard at break time.) When she gets home from school, she realises that her mother has left her and her younger brother to fend for themselves and the impact on Rocks is immediate. Suddenly she has to budget to buy food, the electricity is cut off in their council flat and her day revolves around shielding the truth from her brother. She closes up, pushing friends away and daydreaming in class as the situation bubbles at the surface.
The film features non-professional actors as the main cast of teenage girls, who were invited into the writers room to add their own flavour and tone to the script. This worked wonders in the way that the film tells their story; the language of the girls is on point, relevant and true. You feel as though you're a fly on the wall and the bond between the girls is evident on screen from their connection and you can easily believe that they inhabit the same world - it's totally believable. The film is emotionally harrowing, yes, but also uplifting. Friendship is family, friendship is power - love is universal.