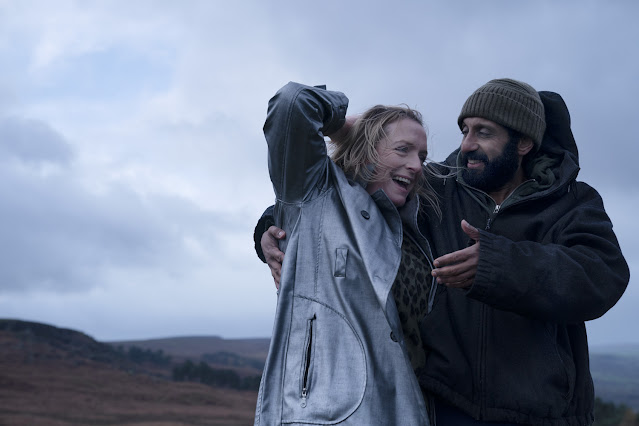 I'm a sucker for a tale of forbidden romance, and writer / director Clio Barnard's Ali & Ava did not disappoint.

Music-obsessed Ali (Adeel Akhtar) has recently separated from his wife, although the pair are hiding it from his family who happen to live on the same street. A lovable landlord, he offers to take his tenant's daughter to school where he meets Ava (Claire Rushbrook), a classroom assistant with Irish roots.

The pair bond through their shared interest in music. Ava, a self-confessed country and folk fan, listens to Karen Dalton on the bus to work. Ex-DJ Ali, dances to techno on top of his car in the early morning mist, earphones on and arms outstretched. Music transports them outside of their small close-knit communities and allows an escape from the mundane. On a particularly rainy Yorkshire day, Ali offers Ava a lift home from school. The pair find middle ground in their musical tastes; rock and roll. As they listen to Buzzcocks' Boredom, there's an immediate spark, and although neither of them realise yet the audience sits up straighter.

Ali & Ava is a real treat of a film. The characters are so believable and grounded they could be your neighbours. Both hide their burgeoning friendship from their family, but there's plenty of electricity between them when they do spend time together; the history of their lives gradually unfolding between them as they fall deeper. The tensions around age, race and social pressures are faced head on; in a film that brings West Yorkshire's Bradford to life on screen.

Rushbrook is mesmerising as a woman who's taken some knocks but really believes that she deserves happiness. Her performance as Ali treads the thin line between having a tough shell and the insecurity that comes from her rocky past. Akhtar's Ali goes from 'one to seventy,' bouncing from scene to scene in a state of joy and energy, becoming vulnerable at home when faced with the breakdown of his marriage.

It's lovely to see a British film that brings to life a less-represented area of the country to the big screen, and one that presents a love story with such respect and tenderness. It's been a while since I've seen a British film craft such well-realised characters and community, and I think back to films like Mike Leigh's Secrets and Lies and, of course, Damien O'Donnell's East is East. Ali & Ava seems more delicate than either of those, but with the same attention to character. A must-watch for fans of British cinema.