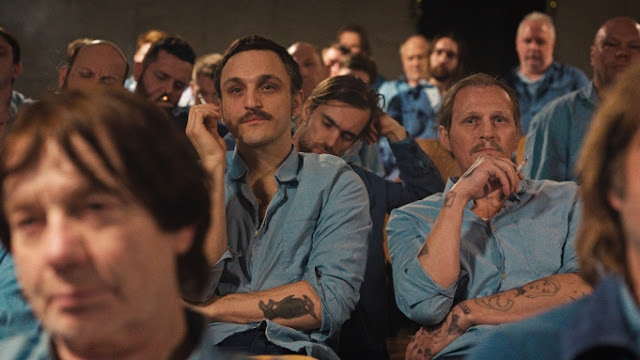 Winner of the Un Certain Regard Jury Prize at this year’s Cannes, Sebastian Meise’s searing prison drama, Great Freedom (Grosse Freiheit) is an arresting, unflinching exploration of queer history from the 1940s to 1960s.

We meet Hans (a truly brilliant turn from Franz Rogowski) in post-war Germany. He has been transferred to prison from a concentration camp to serve the rest of his fourteen month sentence. We learn that he is being held under law 175 outlawing the ‘unnatural sex act committed between persons of male sex,’ and is taken to share a cell with Viktor (Austrian actor Georg Friedrich, who steals every single scene he's in). At first, Viktor, who is serving a life sentence for murder, is violently adamant that he can't share a cell with a gay person. We see their relationship shift over the time as Viktor sees Hans for what he truly is; a victim of society. As Hans is repeatedly incarcerated over the years, their relationship shifts, often taking on surprising and heart-breaking turns, as Hans rides the roller-coaster of being released, then punished, over and over again.

Sebastian Meise has chosen to create an unapologetic look at how society viewed queer men at a time of intense persecution. Rogowki, shockingly thin and haunted after being in a concentration camp, elicits such emotion in the tiniest of looks and gestures; a performance worthy of being reviewed and studied - even revered. Freidrich's performance keeps us guessing as Viktor's strong beliefs and views are hacked away, the empathy moving in. The audience are taken on that journey with them across overlapping timelines, where we're invited to piece together the history that, while different on the outside, is no different on the inside until the eventual abolishment of law 175.
This film made me think back to the Finnish biopic Tom of Finland, another important feature about early twentieth century persecution of the queer community from a post-war perspective. As with that film, Great Freedom will stay with me for a long time. This was a standout at the BFI London Film Festival and I cannot wait for Meise's next feature.