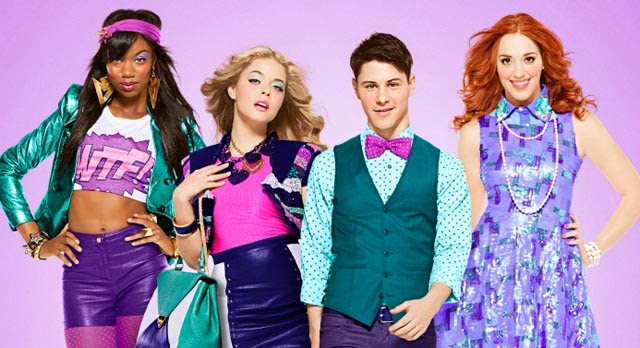 G.B.F with it's bubblegum poster (think 'Mean Girls' dipped in glitter) and apparent cookie-cutter characters, could have been oh so very banal and perhaps a little bit offensive to boot.


But wait, was that Darren Stein (of 90's high-school Jawbreakers fame) on the Directors credit?  Darren Stein, poster boy for indie black comedies which pack-a-preverbal-punch by parodying modern-day high-schoolers (the bitchier, the better) and which immediately scream 'CULT!' is back with a vengeance, and he hit the BFI Flare festival this week to preview G.B.F to the collected, sold-out LGBT audience.

Tanner is a shy, unassuming and self-confessed 'Comic Book Geek' who also happens to be gay.  Noone at his school has "come out of the closet' yet, and Tanner is definitely someone who doesn't want to draw attention to himself by ever being first in anything.  Due to a mistake involving social app 'guydar,' Tanner is publicly 'outed' and faces immediate suffocating attention from the three Queen Bee's of the school (representing the stereotypes we have come to expect from the High-School Movie, but who each go further than these stereotypes to instil their own quirky sense of humour.)  Tanner finds himself the 'prize' in a competition between the girls to acquire him as their "Gay Best Friend" (GBF.)

The film is very good fun from the opening.  Each character has a label which simultaneously reflects both their social status and how removed from reality they actually are.  It's very easy to sit back and miss a lot of the laughs here, the jokes are spot on though- through perfect comic timing and outrageous sweeping statements, and it is through this dark comedy that we really engage with the film.  You simply have to 'get' it- it isn't handed to you on a plate and, like Jawbreaker, it's what lies beneath the surface that draws you in to enjoy the ride.  The language used (think twitter-speak with a knife-sharp edge) has a constant energy to it- the script delivers punch after punch of electric put-downs and phrases that viewers will be spurting off for years to come.

Michael J. Willett as Tanner is the poster boy for the social pariah, his voice-over dripping with sarcastic flavour and often loud-out-loud perceptions of the events "It was a total makeover-montage scene" he narrates (over a TOTAL makeover montage scene)- the self-awareness of his voice is balanced by his utter likeability as a lead character.  Trying to save himself from the homophobic Jocks, he hides behind these 'fierce' and confident girls, only to find himself distanced from his original friends along the way- including his best friend Brent (a stand-out Paul Iacono, whose Lyndsey Lohan obsession creates a wonderful finale to the film.)

The genius of the film (and the reason that it will reach Cult status on release) lies in the supporting cast, who often drive the funniest scenes.  Natasha Lyonne features as the school teacher who reminisces about her 'G.B.F' while stroking a photograph of her cat. Megan Mullally pops up as Brent's over-bearing mum, instigating a movie night you won't forget. With comic greats within such absurd roles, it's hard to write this movie off as just another high-school movie.  It's quirky enough to stand out from the crowd, with Stein once again getting the very best from his cast.  G.B.F = new favourite high-school movie.  If it mentions Lohan, it counts.