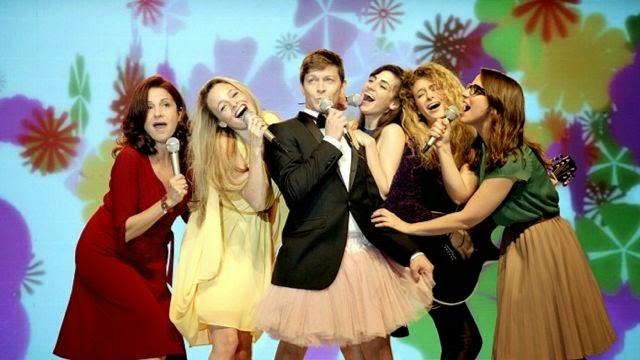 Congratulations hunny.. you just made it from "why I should not" to "why not?!"

In this off-beat and nostalgic comedy, six diverse friends gay, straight, successful, and not so successful gather to watch the Universong competition (the Eurovision Song Contest for my UK readers). Like most viewers, they are appalled by the winning song, and taking the trials of one of their group whose marriage is splitting up as a subject, they jokingly compose "A Song for Anat" (actually the work of Babydaddy, from Scissor Sisters). They are as surprised as anyone when it is chosen as Israels entry for next years competition.  With hilarious consequences, they find themselves embarking on a flamboyant journey that brings about hilarious end results as they go head to head with the Russian entry in the Universong final.  (The Russian entry is so on-point, it's really worth waiting for!)

'Cupcakes' dazzles with it's representation of lives of the six colourful characters chosen to represent their country. In 'Cupcakes', each character is not what they first seem- like the sugary-treats they consume throughout the film, there is more beneath the surface of buttercream.  They are slowly brought out of themselves and their comfort zones through the freedom brought by the contest.  "Ofer" is an out-and-proud pre-school teacher, and is the one who can seemingly live within his own skin and push the others to be more than the stereotypes that they conform to be.  It seems ironic that we quickly discover that he is part of a secret relationship, covered up to spare the feelings of his partner's orthodox family.

The key here is the simple and poignant message which shines through- they are all neighbours, living in a tight-knit Tel Aviv community.  It's a nostalgia for those of us living in a modern city- a group of individuals brought together by the spirit of kindness and comfort when in need of reassurance.  It is this spirit of 'community' that goes on to pervade the competition. 'Cupcakes' is presenting a Modern Israel- one where the importance of family and acceptance of others in society are strong (and colourful) values.  Through Keren's narration (presented in a Blog, very on-trend!) we trace the moral lessons learnt for each of the characters, with the grand finale of the motley crew representing their country on stage for a very entertaining entry. It's not a subtle film, but with the driving force of the camp and over-the-top competition as our backdrop, we are happy to be swept along for the ride.

As the namesake suggests, 'Cupcakes' is a sweet, fulfilling and entertaining film, you could do worse than catching this as part of this year's UK Jewish Film Festival.    Get ready to sing along to the sweetest film of the festival!