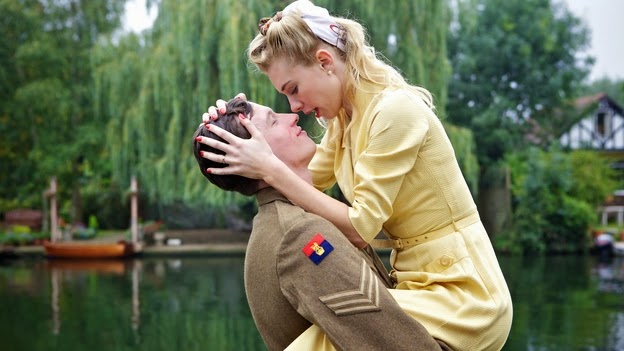 Based his own memoirs, writer/ director John Boorman's 'Queen and Country' is at first mildy entertaining but largely exasperating semi-autobiographical tale of protagonist Bill's (Callum Turner) National Service days, after being conscripted into the British Army aged 18 for two years during the Korean War.

The film begins hopefully, with a few very pleasant scenes of the soldier's orientation and the bonds made between the boys in service.  Many of the clever one-liners, lifted from book, are laugh-out-loud funny, and the new friendship struck up with fellow recruit Percy (Caleb Landry Jones) is delightful- the two boys quoting Casablanca whilst muddling through their training, their obvious chemistry is charming.

However, after the first 15 minutes, the plot unfortunately takes a turn for the absolute worst.  Unsure which story to tell, Boorman's screenplay is a mess of deviations and uninteresting anecdotes which are wasted on the acting talent within the film.  David Thewlis is wasted as their rules-obsessed Sergeant, not given the on-screen time to really commit to the role.  When he begins to breakdown, it's something of a shock to the audience, given that he was only ever a minor part within a hopeless romantic comedy, that turns out to be not so funny.

A cameo role from national treasure Richard E Grant proved to be popular with the audience, but his eye-rolling at the direness of it all seemed to be saying more about the film than his character choices.  The women in the film flit about with no substance, indeed they are baubles for Bill and Percy to consider before moving on.  There seemed to be just the two types of one-dimentional female characters- ethereal beauty 'Ophelia' (her real name is of no real interest to Bill) played by a wooden, wide-eyed Tamsin Egerton, and Bill's sister Dawn (Vanessa Kirby), a brass Canadian who wants to live 'a life of freedom, of joy' and proves this by ditching her clothes and swimming naked with an appreciative male audience.

It's a shame for Callum Turner who shows promise, and the spirited Jones, who is forced to subdue his character's downfall to a point where it's of little consequence to the final product.  Over-reaching and under-achieveing, Queen and Country needed re-focusing before translating onto screen.

Queen and Country is screening in the Laugh category of the BFI London Film Festival.  Get tickets (and make your own mind up!) here.