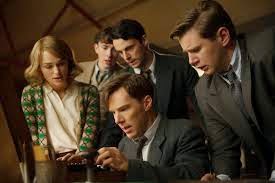 Based on the heroic, but ultimately tragic true story of war hero/ mathematician Alan Turing, the actor discussed what he thought about being back in London to promote the film and more about his representation of the real Alan Turing following a press screening.

How far removed is Alan from, say Sherlock?  They both seem to be outsiders.

He doesn't swish around in a large coat and have curly hair!  But seriously, Alan is a stoic, determined war hero.  This film is more about facing up to the dark stain of government history of what they did to hundreds of men at this time.  it's dangerous to overlook these things and write them out of the history books.

Are you happy to be in London, opening this festival?

I'm a Londoner, I love it here and I've always wanted to be part of the Film Festival. I'm so excited about this film because I'm hoping that it inspires people to go and find out more about this extraordinary man.

Your name is on the upcoming Oscar rumour list, what do you think about that?

To be honest, if that is what it takes to get people to see the film and it creates an interest in the story behind who Alan was, then that's fantastic.  Our storytelling gets easier and I want our film to be a launching point for more interest in him.


So what's the film like?  The Imitation Game is based on the real life story of mathematician and cryptanalyst Alan Turing.  Starring Matthew Goode, Keira Knightley and Charles Dance, the choice of cast gives the story the gravitas that this remarkable tale deserves.  Graham Moore’s thoughtful screenplay alternates between three significant periods of Turing’s life: the nerve-wracking daily race against the clock as the team of code-breakers at Bletchley Park work to decipher the seemingly impenetrable code; the interrogation of Turing after his arrest in 1952 for ‘gross indecency’ which lead to his devastating conviction for the criminal offence of homosexuality; and flashbacks to school days and his intoxicating friendship with a boy named Christopher.

Charming, surprising and often very funny, the film is a great triumph for British cinema.  Be sure to catch it this month when it gets general release.