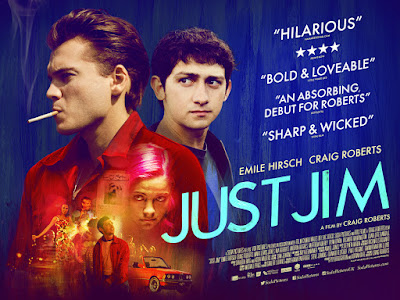 Just Jim is a super stylish, comedic and personal directorial debut from one-to-watch, Craig Roberts (Submarine). Lonely teenager Jim splits his time between video games and the cinema. His life changes when Dean (a charismatic Emile Hirsch) moves in next door. Jim can’t believe his luck when Dean offers to instruct him in how to be cool. Cue brilliant scenes involving a retro make-over, awesome dancing and endless chain smoking.  Jim is suddenly wrenched out of his complacency, going on dates and throwing big parties with Dean’s help. But as Dean’s influence becomes more insidious, Jim is forced to question whether his newfound popularity is really worth the trouble, especially when he finds out that Dean has a dark secret.

A must watch for fans of coming-of-age drama and strong British cinema, Just Jim is one of the most engaging and original pieces of film from 2015.  Cinephiles will love the clever filmic references and playful tone of Roberts' filmmaking, and there is much to enjoy with the original setting of Maesycwmmer- a kind of Welsh John Waters-eque suburban hell, where anything and, equally, nothing can happen.

As Roberts' himself points out, the tone of this movie stems from the nihilistic town these characters live in. "In the film Maesycwmmer is like a pointless creation, like somebody built it and left. There is little hope and the streets are paved with boredom,"  states Roberts. This is where the comedy stems from.

"I wanted the comedy to come from the awkward moments with Jim. He is our way into this town, he is our eyes."  It’s a dark comedy. Indeed, we are encouraged to laugh at the awkward situations, the characters are heightened in their obscenity.

And what do we think of Dean?  The name Dean is apt- he oozes James Dean cool sophistication, all appearance and delicious superficiality, and is dropped (seemingly out of thin air) into this tiny Welsh town.  He charms us all, but his edge remains sinister and confusingly so- the drama is built on his charisma- we learn just what a perilous trait this can be.  Hirsch is breathtaking in this role, where he can really relish in breaking down what is, essentially, his current real-life image, and proving what strength there is in his artistic talent as a character actor.

'Just be yourself' is the message to take away from this film, and, unlike so many of it's American counterparts, the narrative actually drives this theme home without compromising on the style and tone of the piece.  Its surreal edge is to be celebrated- it's break away from the politics of the classroom seems refreshing and honest.  A must-watch.