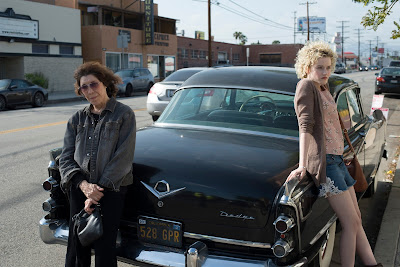 Grandma is the recent Sundance darling starring Lily Tomlin as Elle, the hippy, foul-mouthed and hilarious septuagenarian, in what is arguably the most satisfying casting of the year.
Still reeling from the death of her long-time partner Violet, and in the process of breaking up with much younger new girlfriend Olivia, feminist poet Elle’s defences are at an all-time high. What she really doesn’t need is her 18-year old granddaughter Sage turning up with her own drama.

Sage is newly pregnant, and can’t fund the abortion that she’s booked for later that day. She goes to Elle for help but Elle has recently paid off all of her debts in the hope that this will give her the freedom that she needs to unshackle herself from a materialist lifestyle. The pair embark on a road trip through LA in the search for the much-needed cash, which gives them just enough time to confront both their demons and each other. The screenplay is sharp, witty and on-point as it follows these independent females around the city, the pairs bond getting stronger with each disaster that comes their way in a film that boasts a lot beneath the surface. Displaying a lightness of touch, along with a fair dose of insight, About A Boy director Paul Weitz has crafted a supremely enjoyable, consistently surprising road movie which will make you laugh out loud.

Grandma is released in UK cinemas on 11 December 2015.