Hi all!  A little post for LGBT history month and as a precursor to the wonderful BFI Flare Festival, which opens in March this year, I have decided to list my top three LGBT films at the moment (it constantly changes!) I'm sure a lot of my readers will notice the distinct lack of Todd Haynes' Carol, but that's only due to the fact that I have chosen to speak about my other favourite of his, which takes the top spot.  I have chosen three films which have not only made great viewing, they have approached the genre uniquely and really struck out against convention, whilst surviving a little under the radar.  Enjoy everyone!

When celebrating LGBT History Month, I have to go straight to my Todd Haynes collection, to find a film that brightens even the most grey and miserable winter months- brimming with rich, vibrant colours, the award-winning Far from Heaven starring Julianne Moore, Dennis Quaid, and Dennis Haysbert.

Set in 1950s Connecticut, Far From Heaven centres around "Cathy Whitaker" (Julianne Moore), who is the picture perfect, socially esteemed suburban housewife of a successful advertising executive (Dennis Quaid). With a beautiful home, two happy children and surrounded by like-minded friends, Cathy glides through life unperturbed by issues bigger than where to find a caterer for her next party.

However, very quickly Cathy's world is rocked by twinned-revelations: Her husband Frank (Dennis Quaid) has been leading a "secret life" looking for intimacy that he doesn't desire from his wife, frequenting gay bars and clubs, while Cathy has simultaneously found herself drawn to her black gardener Raymond Deacon (Dennis Haysbert).  Both characters have to face a choice of whether to go with their hearts or submit to the external pressure of keeping up appearances.

Absolutely a melodrama, this film spoke to me about forbidden love on such a deep level, that it's impressed me more than other films of covering LGBT issues.  Excepting Carol (Haynes' latest), this still is on my top list for not just LGBT film but film in general, with it's clever throw-back to 1950s cinema, Haynes' allows us to feel nostalgic whilst also reminding us that these issues are mainstream issues, and should be treated as such. 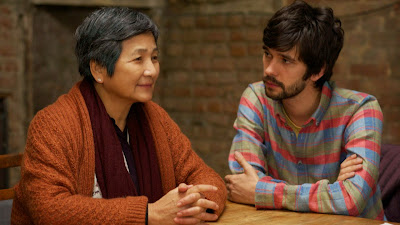 My next choice has to be Lilting, the first feature film from London-based filmmaker Hong Khaou.  Starring the endearing Ben Whishaw as Richard, Lilting tells the story of the loss of Richard's partner Kai,  and how he longs to share his grief with Kai's Cambodian-Chinese mother, Junn.  They do not share a common language, but Richard recruits an amateur translator who struggles to bring Richard's profound grief to light without dealing with the secret we dance around- that Kai was gay.

I chose this film because it is so much more than a film about two protagonists playing out a LGBT relationship, that part of the narrative has already happened.  It's a universal love story centred around grief and an all-inhabiting relationship.  In the way that audiences turn to Brief Encounter or Roman Holiday as their go-to classic romance, I also go to Lilting.  Dealing with a subject as profound and tragic as the loss of love as delicately and as interestingly as it does is a real success, especially for a first feature.  We are also able to see the struggles that Kai had with the lack of cultural understanding about his relationship within his family, which is both fascinating and significant for modern audiences.   The struggle to connect the two vastly conflicting cultures palpitates throughout the film, with a concluding crescendo which burns brightly and passionately, breaking the barriers between Richard and Junn, where a common language is found in the grief that they share for the person they most cared about.

The Way He Looks 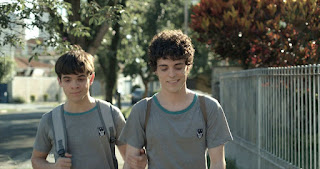 The Way He Looks, a Brazilian first-feature starring Ghilherme Lobo and Fabio Audi, is a full-length version of Writer/ Director Daniel Ribeiro’s 17-minute short from 2010, and a winner of the Teddy Award for Best Feature at the Berlin Film Festival in 2014.  In The Way He Looks, Lobo plays Leonardo, a young gay teen who has been blind since birth and gets walked back home from school every day by his best friend Giovana (Tess Amorim). Their familiar and safe routine is upset when Gabriel (Fabio Audi) joins their class and becomes friends with Leo.

It’s a sweet, moving and effortlessly romantic film which handles the love story with charm and sensitivity.  With Leonardo suffering from his visual disability, the way that our couple fall in love is absolutely beautiful- relying solely on their verbal communication which is a whole new way to see the romance play out.