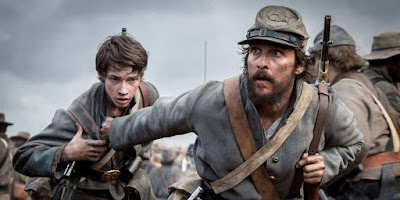 Free State of Jones launches us back to the historic 1862 Battle of Corinth, and introduces us to Newton Knight (Matthew McConaughey), a farmer turned battlefield medic in the Confederate army during the American Civil War. Risking the death penalty due to desertion, he leaves his unit and returns home to make sure that his teenage nephew, tragically killed on his first day of fighting, is buried by his family. Shocked by the intense brutality that the women and children are subjected to in his home county of Jones, Mississippi, Newton stays to protect them from the Confederates who purge their land of livestock, crops and material goods for taxes.

Based on the true story of Newton Knight, as chronicled by numerous biographies and historians, Free State of Jones (Jones being a fictional county) is the unflinching account of a former farmer and family man who encounters many struggles in his desire to achieve absolute freedom in a time where so few could afford it.

Having deserted the army, he is helped by a trusted friend to the local swampland; the one place that the Confederates, hot on his tail, can't access with their horses. Several runaway slaves are camped there, led by Moses Washington (Mahershala Ali), who wears a physical reminder of his time in slavery; a heavy, spiked iron collar. They spend their early days as a tribe of people where class or colour lose all significance; catching fish and swapping stories of their lives and families. An influential and impassioned orator, Newton sees beyond his own struggles and rallies fellow deserters as well as runaway slaves, and women in an uprising against the corrupt local government.

After the Siege of Vicksburg, Confederate desertions increase considerably, and many of them find their way to the swamp. Newton's new army of the oppressed succeed in capturing a large slice of south-east Mississippi, organizing it as the "Free State of Jones". Although they get little help from the Union, they manage to hold out until the end of the war.

The story is interspersed with the saga of Newton's great-great-great grandson, who is going through his own oppression under law some 80 years later.

"Last time I checked the gun don't care who's pulling the trigger," says Newton in one affecting scene early on. Newton is steadily disillusioned as he engages in a life-long struggle for freedom. Matthew McConaughey provides a solid presence in each scene. It's an affecting and sincere window into just how cruel and all-comsuming the war was not just on those who fought it, but also for those left behind. His future wife, Rachel, an ex-slave who longs for freedom and finds it by learning how to read, is a welcome addition to the narrative and adds real value; both in Gugi Mbatha-Raw's nuanced and subtle performance and in bringing a warmth to the story.

In an unusual move, Director Gary Ross has created the companion website freestateofjones.info where, on a scene-by-scene basis, he pinpoints the historical records that informed each creative decision, citing his sources and explaining the context of the situation.

However, the film struggles; remaining faithful to the real life events means that we are subjected to a lengthy film with pacing issues and endless heartbreak with no let up. McConaughey, teamed with the ever mesmerising Mahershala Ali, provides a strong core to what can be described as a slow melodrama. It's an important story, no doubt, and one where perhaps the real life story is even more unbelievable than the one depicted in this film. Subtly in the story was much needed and the human elements in the subtext were missing in parts which only focused on what Newton was feeling. Newton was a strong and iconic figure in history, but what of his wife? What of his friends? It would have been beneficial to see their sides of the story and understand their struggles; so often misrepresented or glossed over when their stories are just as important.

Grisly it often is, viscerally harrowing and brutal; it's a poignant reminder of the horrors of war and persecution.