Eager to keep audience participation central to the festival, those in attendance are invited to submit feedback forms at the end, with the most-loved film gaining the highly commendable Hitchcock du publique première award.

After a very lengthy red carpet (the cast and crew were celebrated from one end of Boulevard Albert to the other, before coming to a stop in front of the Emeraude Cinémas Dinard, the awards ceremony saw Sing Street, by John Carney, sweep the board with four wins. Claude Lelouch gave a special mention to Away by David Blair. 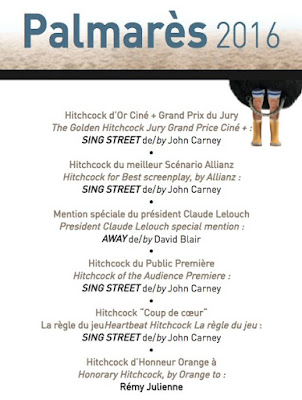 Along with a selection of diverse and engaging film, the festival boasts one of the most picturesque settings of the festival calendar.  With a sprawling beach, quaint shops, and enough cafes and restaurants to keep any foodie happy, it's a stunning setting that guarantees a good time. A great big thank you to Brittany Ferries for making the trip possible and the passage a very smooth and happy one.