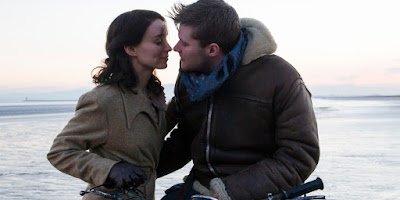 Director Jim Sheridan (My Left Foot) returns with The Secret Scripture, a drama based on Sebastian Barry's well-loved Irish novel. The hidden memoir of an elderly woman confined to a mental hospital reveals the history of her passionate yet tortured life, and of the religious and political upheavals in Ireland during the 1920s and ’30s. Vanessa Redgrave and Rooney Mara play older and younger versions of Rose Clear, the protagonist out of place in WWII Ireland. Falling in love with a local shopkeeper Michael Eneas (Jack Reynor), they marry in secret and live on the edge of the village, away from the prying eyes of the men within; those who cannot help themselves around the beautiful Rose.

The screen adaptation of this romantic and tragic tale of a woman's plight during the second world war has been long-awaited and it is no doubt that Sheridan is a master storyteller and a directional force. Choosing to split the story into past Rose and present (Vanessa Redgrave) was the right decision. Rose McNulty (Redgrave) must vacate the soon-to-be demolished mental institution in Roscommon, Ireland that she's called home for over 50 years. The hospital's psychiatrist, Dr. William Grene (Eric Bana), is called in to assess her condition. He finds himself intrigued by Roseanne's seemingly inscrutable rituals and tics, and her fierce attachment to her Bible, which she has over the decades transformed into a palimpsest of scripture, drawings, and cryptic diary entries. As Grene delves deeper into Rose's past, we see her as a young woman (Mara), whose charisma proves seductive.

Mara looks beautiful in her scenes, so stunning that she even catches the eye of Father Gaunt, who, played by Theo Jones, is absolutely terrifying. His performance is subtle and dynamic and often without dialogue as he quietly stalks her around the village. Indeed, whereas present day Rose relies on her storytelling skill to make Doctor Grene believe that she isn't insane, the Rose of the past looked men straight in the eye and was without fear. It's such a contrast that we feel the dread and tension set in early; what could have possibly happened to her to make people believe that she was insane?

Beautiful scenes of rolling Irish countryside and stunning period clothing complement the gentle romance between Rose and Michael. Reynor gets all of the credit in these scenes, as his very presence is affirming; reaching Rose at the point when her loneliness was all-consuming. Hunted by a group of extremist men from the village, Michael has to leave Rose and that is when her fate is sealed and her horror is played out.

Such an Irish tale as it is, it was puzzling to find only a few notable Irish and English members of the cast, what with Eric Bana and Rooney Mara taking centre stage. When quizzed, Sheridan was his usual blunt force; "if you want to get a movie made, you have to have a movie star." Read: an american movie star, although he was very pleased when Redgrave signed up for the project "I signed up as soon as I heard I could work with her."

Of course Redgrave was wonderful; she is fearless in attacking the human vulnerability that the older Rose has in abundance. She narrates her scripture and tells us her story, and we are spellbound. However, the story did lose its way and the conclusion was a real Hollywood-directed affair. Sometimes it seemed as though we were suffocating in silence and tension a which made for gripping storytelling However you never really felt as though you were scratching the surface and the cutting back and forth between decades could be disorientating.

It's a comfortable watch for fans of the romantic drama, but Sheridan played it too safe, and in the process made the latter part of the film obvious and somewhat of a let-down.