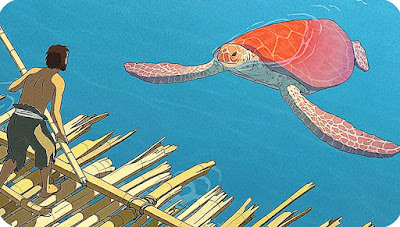 It’s very unusual for a film to make as huge an impact on me as The Red Turtle did. I was lucky enough to enjoy a sneak a preview last week, followed by a Q&A with the visionary Dutch director Michaël Dudok de Wit, and was left utterly speechless by the end of the screening.

Shunning the use of dialogue, the wordless animated feature tells the story of a stranded castaway who longs for escape, constantly foiled by a red turtle, who, despite being the titular character, takes a long time to show up. When it does it’s truly mesmerising; pitched against the tones of the film the brilliant red captivates (Dudok de Wit refrained from using any red in his colour palette before the turtle) and the tension between its otherworldly beauty and unsettling power is palpable.

The storm which sees our protagonist thrown onto shore is violent, vivid and backed by a haunting score. What’s both clever and brave is the element of surprise and lack of context given to this character and the situation. It’s refreshing too.

The Turtle appears at a crucial moment as it looks like our protagonist is about to escape from his nightmare; only to transform into his soulmate. The romance between them is nuanced and down played. Pitched against what has become a very small world (that of their island), there is a loveliness in the revelling in the small things that make life so worthwhile; a relationship blooming in the abyss, the lack of desiring anything more than that in their lives.

It’s actually not very surprising that the film was backed by Studio Ghibli; the studio’s first co-production. In keeping with their aesthetic and revered tone, the story is subtle, allowing the animation to speak volumes and take your breath away with the absolute beauty of it. A visual treat of hand drawn animation mixed with computer animation, the style is never compromised. Each frame is breath taking.

The score is pitch perfect; it ebbs and flows along with the story and never demands first place; the perfect marriage of visuals and sound.

See this film if you have recently been inundated with popcorn movies which throw everything at you, all at once. Sometimes the slow and steady approach wins out.