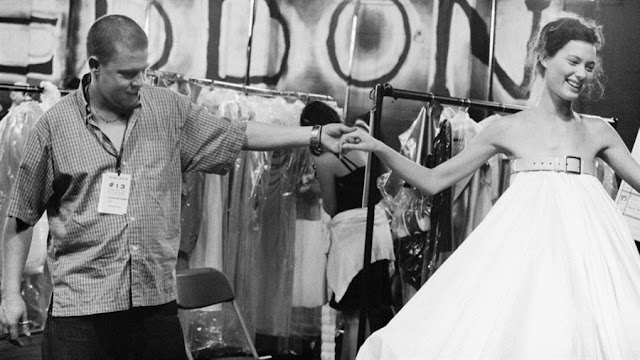 I was living in New York City when I stumbled head-first into the extraordinary world of Alexander McQueen. I'd been a fan of his work in my own small way; I was in my early 20s and I loved, and worked in, fashion. I was a young woman obsessed with the exploration of identity through clothes and was driven to all things unique, provocative, powerful.

McQueen's work appealed because he was unabashedly and unapologetically himself. He was known widely, his shows were the golden ticket in the fashion crowd, British Designer of the Year came calling. Everyone who was anyone had been spotted wearing his trademark skull scarf at one point or another. He was fiercely proud of his working class roots, having grown up in Stratford, not far from my home town. His work always seemed to be a homage to London, a city I was desperately missing. He was plucked from the London fashion scene to take on the role of Creative Director at Givenchy, later moving onto Gucci. He had never been more in-demand, popular or famous. In 2011 the fashion world was shaken as the tragic news spread throughout the industry; McQueen had committed suicide at the age of 40.

The following summer, I went to see the Met's exhibition Alexander McQueen: Savage Beauty and couldn't forget how inspiring and heartbreaking it was to actually see the clothes in real life, to breathe in the collections as a whole. Quotes adorned the walls. 'I find beauty in the grotesque' one read. 'I have to force people to look at things.'

Well those days were over. You didn't need to force people to look at anything in this exhibition; it seemed as though McQueen was with us, taking us from the dizziness of the controversial Highland Rape collection to the ethereal beauty of Voss or the pioneering, innovative approach to identity in Plato's Atlantis; here was his life story mapped-out by collection.

So why, then, after the success of the exhibition (which moved to the V&A in London) was there a need to produce a documentary, posthumously? Directed by UK-based filmmaker Ian Bonhôte (In the Blackout, Alleycats), and co-directed/written by doc producer/writer Peter Ettedgui (George Best: All by Himself, Listen to Me Marlon, Everything or Nothing), the film promised to be 'an intimate revelation of McQueen's own world.'

You really do feel the intimacy from the very opening of the film. Featuring interviews from his close friends, colleagues and family but also never-before seen snippets of filmed content that McQueen collected himself, we're thrusted into McQueen's personal narrative; starting out with no real financial backing and armed with only his gritty determination to succeed. We're taken through his time studying in Central Saint Martins, to his first encounter with Isabella Blow, and his first collections onwards. Model Jodie Kidd talks about her first time walking for him at the tender age of 14, while other models chime in about the most memorable shows; including one where a car caught fire but they still walked. McQueen takes the camera as we're shown footage of his journey to Paris after having been awarded the Givenchy job; so young, carefree and excited about his new adventure, through to frought, stressful periods on the eve of shows with half finished pieces of couture littering the floor.

The most personal are those who worked closely with McQueen, including his nephew Gary who worked as a designer in the later years. They discuss the highs and the lows; the enchanting genuis mixed with the inherant darkness of McQueen's temperament.There's one obvious figure missing from the interview list. Sarah Burton, McQueen's right hand woman for 15 years and current Creative Director of the Alexander McQueen fashion house, declined to be interviewed after some consideration. In a way it's a not a bad thing; McQueen's personal story is focused on, rather than dive into the 'House' of McQueen and it's politics, including Gucci's decision to keep it going after his death.

The documentary is a gentle, sensitive exploration into the personal and professional challenges of being at the forefront of a notoriously cut-throat industry, but it isn't the clothes that shine through - it's McQueen's personality. Humble, loyal and kind, he was a working class boy who believed in his role in fashion before he even stepped foot in fashion school. To finish on another poignant quote from his exhibition; 'There is no way back now. I'm going to take you on a journey you've never dreamed possible.'