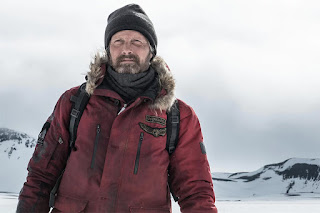 An expanse of white as far as the eye can see, gently sloping mountains in the horizon, a polar bear pads silently across the snow, pausing briefly to gaze back at the watching man across the valley.

At first Arctic reads as a classic survival narrative; the basic man vs. nature conundrum. I’d recently seen The Mountain Between Us, which draws some very obvious similarities; plane crash, hostile snowy environment, a great expanse needing to be crossed for a chance of survival. However, unlike relying on the pairing of Kate Winslet and Idris Elba for context,  Arctic’s dialogue is bare. This is largely due to the fact that there is only the protagonist for the first third of the film, played by Mads Mikkelsen.

It appears to lull you into that false sense of security of knowing exactly how this works out; he sticks to a routine of catching fish, laying out black rocks spelling ‘help’ against the snow and signalling for nearby aircraft. However, crucially, we don’t know who he is. He speaks very little, in both Danish and English. He offers no information to help us piece together a backstory and remains an enigma throughout, which feels fresh. The character becomes more than a person; he becomes the flicker of hope for survival, the spectrum of emotions that occur in the darkest of hours.

There is plenty of drama to keep us on the edge of our seats; he has a chance of escape quite early on – a small helicopter has spotted him and attempts to make it’s way towards him in strong winds leading to a crash. There are two people on board; one is killed with the other, a woman (Maria Thelma Smáradóttir), who survives but is badly hurt and must be cared for. Suddenly the odds of both surviving are halved; the danger is intensified.

Here is a tale of endurance over survival. This is where Mikkelsen excels; he digs deep to portray every possible emotion through a gruelling and ice-cold journey. He is silent but his face says everything. I laughed in delight, I wept quietly. It’s hard to imagine anyone else playing this role.
It’s a feat for Joe Penna, directing his feature film debut. See it for Mikkelsen, stay for the sensitive direction and the stunning cinematography.