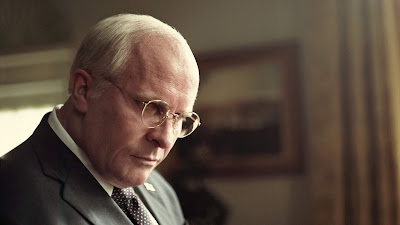 Christian Bale is unrecognisable as 46th Vice President of America, Dick Cheney, the controversial figure in US Politics and arguably the most powerful Vice President in history. Bale thanked 'Satan' for inspiring him to play this role at the Golden Globe's this month; he wasn't a nice guy. The film, which is not really a biopic - more of a dark comedy - covers almost six decades of Cheney's life and it's a fascinating one. From flunking college, landing a couple of DUIs, becoming a political insider before taking on the role of CEO for Halliburton - an energy management company - and this is all before becoming Vice President. The VP role is, as he says in the film, a 'nothing job, a symbolic job.' Director Adam McKay (The Big Short) argues the Cheney made it so much more than that.

Bale put on 18kg of weight for the role, added false teeth and neck rolls; relishing the chance to sink into this devious character at the centre of the war with Iraq. It gets off to a pretty entertaining start as we trace him from college to his first job in Washington D.C. as an intern; with the usual McKay tropes of still frame introductions to characters including Steve Carell's Donald Rumsfeld. However, when you finally do get an insiders taste of the Capitol, the frenetic energy that creates such intrigue is dropped, and McKay focuses on educating the audience about the political landscape in detail, much to it's detriment. The film comes in at 2 hours, 20 mins - surely we don't need to be spoon-fed every single conversation Cheney has with his colleagues. Tighter editing would have kept the fluency which is lost throughout the last two thirds of the piece.

The supporting cast show sparks of wit and intrigue - from Amy Adam's portrayal of the driven wife Lynne, to Sam Rockwell's delightfully green George W. Bush. However the star is Cheney and the camera soon find it's way back to him, unfortunately. Bale is great; he is a method actor at heart and it's a role he clearly relishes and plays with gusto, which should indeed be celebrated, but the script lets him down time and time again.

The film is a satirical comedy - but not one that punches above The Big Short - or even comes close. Suffice to say, Vice's pace is bloated and frustrating.