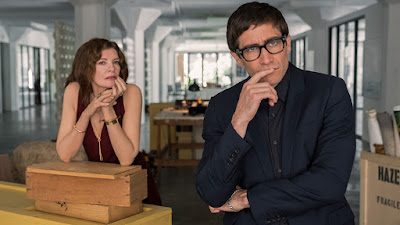 Velvet Buzzsaw, a film about the upper echelons of the critics, curators and dealers in the artistic society of Las Angeles, is a brilliant piece of stylish, well-written, self-satirizing and intentionally superficial cinema.

I was absolutely captivated by the trailer before the film's release on the streaming platform - it suggested absurdity, horror, beauty and caricature performances from the art world. I wasn't disappointed.

So much of what cinema tries to do now is to over complicate a plot, bloat a story line and try to please everyone until your audience is mainstream and the film is mundane. I haven't written a blog piece about a film for a few months, so uninspired by cinema recently (my fault for missing my beloved Berlinale this winter.) However, here I am, already excited about a re-watch. That's also the great thing about watching film on a streaming service. Hit replay.

Netflix took a chance on Dan Gilroy's follow-up to Nightcrawer -  the brilliantly grotesque, neon-seeped tale of the bottom feeders of LA. Here he turns his attention to the elite society of the very same city. The film debuted at Sundance 2019, describing itself as a horror-thriller hybrid and boasting a cast of genius character-actors led by Jake Gyllenhaal as Morf, an unapologetic art critic with ruthlessly discerning taste and the very best lines, delivered in hilarious deadpan. Rene Russo is punk princess turned art dealer to the rich, practically running the town. Toni Collette, complete with art house blonde bob, is pitch-perfect as Gretchen - a curator of the people turned sell-out art dealer. British actress Zawe Ashton is Josephina, full of delicious melancholy and carefully calculating, who longs to be part of the crowd.

It is Josephina who discovers the dead body of her neighbour on the staircase. Shaken, she learns that he was an artist who demanded that all of his paintings be destroyed when he died. Intrigued, she enters his home and is mesmirised by what she finds; dark imagery painted by an obviously unhinged mind. She knows immediately that her crowd will love it.

As these paintings begin to gain popularity, something very strange is happening to those who spend too much time around them. The thriller turns to old school horror as we are treated to a variety of scares; both creative and fascinating - one of my favourite scenes is where the art consumes the human, literally.

At times, it is true that the film struggles with it's identity, swinging from horror to comedy to melodrama - but that's what I find so interesting about it. The film is also very shallow, but it is a pastiche of a shallow world. Art for money, money for art.

I'll leave it there. As Morf states, critique is so limiting and emotionally draining. I hope you enjoy.