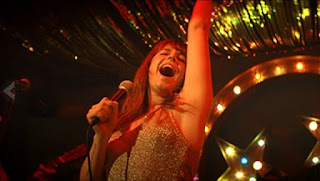 Wild Rose had its debut at the BFI London Film Festival and opened across cinemas in the UK this month. An absolute delight of a film, the narrative follows Rose-Lynn 'Rose' (Jessie Buckley) as she follows her dream of becoming a country music star.

Set in Glasgow, Scotland, Rose is fresh out of prison and keen to continue working on her 'craft' in becoming a musician outside of her home town. Her cell walls are covered in maps, postcards and images of Nashville: it's her mecca. Her journey hits an almost immediate roadblock as she arrives back home - we find out that she's lost her job at the country-themed bar she's been singing in since her teens, and she has two young children who have been living with her mum (Julie Walters). They all greet her cautiously; it seems that her priorities haven't always aligned with that of being a good mother or daughter. Soon she's having to face her reality of being a single mother to estranged children and working for minimum wage as a 'daily woman.' Rose is not a delicate flower by any means - she's spontaneous and passionate and her frustration is palpable.

Sophie Okonedo as Susannah, Rose's new boss, offers support and encouragement. She has money and connections. Rose can finally see her way out, but faces disappointing her family yet again.

My absolute favourite thing about the film was the energy and love for Country music that the filmmakers obviously have in spades. Buckley performs with so much care and attention for the fans and the music is top-notch. The soundtrack seeps into every major sequence, reminding up even in the most desperate of times who Rose really is and how talented she is. The music swings from joyful, uplifting, to devastating.

I also adore the relationship with Rose and her mother. Jessie Buckley plays the working class Glaswegian as an incredibly vulnerable and yet vivacious woman in a role that seems to have been written for her. While Jessie is charismatic, Julie Walters is captivating. Every scene between them fizzles withe electric energy - for me it's the most important relationship arc in the film and it's dealt with sensitively and with intelligence.

Wild Rose is a spell-binding film told with a huge amount of tenderness and love for its unconventional heroine. Jessie Buckley is a huge talent and I for one can't wait to see what she has in store next (she was born to play Janis Joplin, please make this happen!)