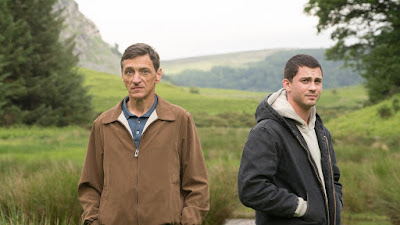 Following the loss of his wife, Frank Fogel (John Hawkes) embarks on a journey to spread her ashes in the remote countryside of her native Ireland. Her last (and only) wish also stipulates that their son Sean (Logan Lerman) joins him for the journey. Fresh out of prison, Sean is full of attitude and pain; he misses his mother and he has been estranged from his father for years following a falling out as a teenager. The pair have never had the chance to heal, to forgive or move on. What comes next is a drama-filled road trip which forces them together while they navigate new cultures and people - including a hitchhiker they pick up in Dublin, the charismatic Jewel (Sarah Bolger) who is looking for a new start in life. It becomes pretty clear that they all share that in common.

The feature film directorial debut of Elfar Adalsteins, and written by Michael Armbruster, the film is a sensitive exploration of a father-son relationship when both are grieving. The road around Ireland becomes more then the pair bargained for as they come face to face with the pain of their shared past while facing up to a future without Mrs Fogel to guide them.

Plenty of deliciously dark comic moments punctuate the piece - Frank is the very image of a buttoned-up, shy man who is unable to embrace adventure which is completely at odds with his son. Mysteries also unfold around Mrs Fogel's history in Ireland, proving that there is more than meets the eye - even within your own family.

This is a brilliant film with a lot of heart and central performances that transcend the script to lay bear the complexities of failed relationships, the heartbreak that they bring and the importance of forgiveness. It's also an uplifting film, with many surprising moments of sheer delight. Sometimes we need to leave home to feel free. It was, for this reason, my favourite film of Edinburgh Film Festival this year and I hope that many more get to see it.