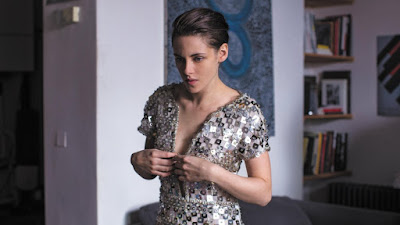 This week my pick of the streaming offering is Olivier Assayas' 2016 masterpiece Personal Shopper, which is on the BBC iplayer for UK audiences.

Maureen (a soulful Kristen Stewart) is an undervalued personal shopper to a starlet, Kyra, but won't leave Paris until she receives a sign from her recently deceased brother, Lewis. Both Maureen and Lewis are mediums, and were born with the same heart defect. They made a promise in their childhood that if either was to pass away before the other, they would give them a sign. The film opens with Stewart spending the night at Lewis' house, where unexplained markings appear on the walls and creaks and groans from the old house place us firmly into the classic horror territory.

It doesn't leave us there though. Soon we're following Maureen as she makes her round to the fashion houses, collecting clothes for her boss and buzzing around central Paris on her scooter. It's so chic, and so Stewart. This is the world that we know she belongs to, right? It's sexy and confident. She lets herself into Kyra's apartment and meets the unsettling Ingo, Kyra's lover. He has been dumped, but he won't let that happen, he assures Maureen assertively. He takes an interest in Maureen straight away, but we feel a sense of foreboding. It's a turning point.

She makes her way to London and begins to get text messages from an unknown number, at first playful then unsettling. Is it a message from Lewis? Is someone playing a trick on her? Perhaps Ingo? Her new correspondent asks her what she's most afraid of. The answer is in what is most forbidden. For her right now, it's trying on Kyra's expensive clothes and shoes. When she does just that she almost camouflages herself, becoming someone else. At the every least, escaping who she is.

The ending of the film, which I don't want to give away, grounds us back to where we started; in the spiritual. Assayas keeps the film's genre fluid. We aren't watching a thriller, or a melodrama or a horror but a unique and vivid merging of the three. It's artful and brilliant.

Stewart balances a depth of performance with little dialogue to play with. She is strong, frail, sensitive and unpredictable. Her drive to face her demons, quite literally, keeps us enthralled on the journey. What a journey it is.