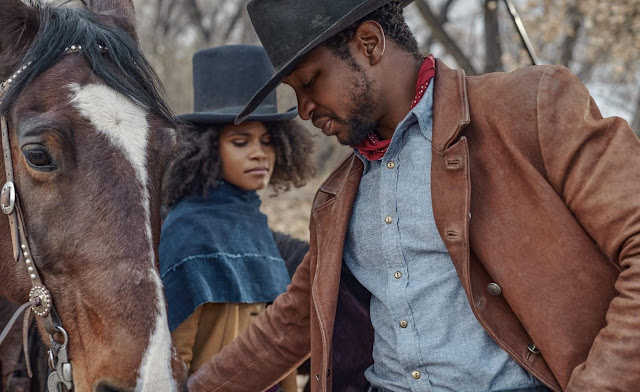 Maybe it’s the trauma of the pandemic, or the fact that I’ve uprooted my life recently (moved jobs, homes, cities) or just the fact the seasons have changed - but who knew that my soul needed escapism in the form of a Western? Not me, that's for sure. My mum watched a lot of John Wayne films when I grew up. Even at an early age I wasn’t hugely interested. I didn’t like the hysterical women in them, or the obviously fake violence (which says more about me then I probably want to admit).

However, settling down in Manchester’s Home cinema to watch the London Film Festival’s opening film, Jeymes Samuel’s The Harder they Fall, I was entranced from the first shot of galloping horses. Each frame seemed to have been painstakingly planned out, as though I was watching a storyboard come to life - and the music (the whole score was crafted by Samuel) is so fresh, it’s hard to think of another film quite like it. To date, it’s the most stylish film I’ve seen this year - and it'll be on Netflix next month for all to see.

The film opens with gang-leader Rufus Buck (Idris Elba) killing a family, but leaving the son alive, marking his forehead with a cross. The son grows up to be a head of an outlaw gang himself, Nat Love (Jonathan Majors) who, now that Buck is in prison, is picking off Buck’s gang one by one. When he hears that Buck is out and is now residing in a small town west of the Mississippi, Redwood, which he hopes to grow into a Mecca for it’s black residents, Love wants to finally tie up loose ends. Carnage ensues, as all the things that makes it a Western; those snappy lines, the glorious gun fights, the bullet-flying action, bursts from the screen.

For Samuel, who wrote, directed and produced the film, it was fifteen years coming and he knew from the conception of the idea that Idris Elba was going to be involved. Dubbing it a ‘Black Western’ The Harder They Fall takes us to the American West, with a narrative jam-packed with gun-slinging, wise-cracking characters based on real outlaws - an all-star assembly of real-life Black cowboys, including scene-stealing Stagecoach Mary (Zazie Beets) and Cherokee Bill (LaKeith Stanfield).

One of the best sequences starts early; with Buck’s escape from the train he’s being held on. Regina King, a glorious turn as mysterious Trudy Smith, rides her horse right in front of the train head-on, knowing that she has the power to stop it. Because the film is all about power, it oozes it. And that’s what’s so important here.

We can't escape the fact that we're watching an all-Black cast, in a western. The two have never gone together, but, Samuels argues, the characters are based on real people. These are scary, powerful figures that history chose to re-write because there was no representation for these stories in Hollywood. The film bursts with Black talent, and not just that - female talent as well. The women in this film, I argue, steal the show. Complex characters who ride along with the best of them, and, on occasion, fall into fist-to-fist combat.

It's refreshing, but more significantly, exciting, to see this. Alongside a diverse cast, the soundtrack boasts everything from slick R&B, jazz, funk and new songs by Ms. Lauryn Hill, Alice Smith, Samuel’s brother Seal, and my new favourite song; a track laid down by Jay-Z. In fact, the film was also produced by Jay-Z, aka Shawn Carter. Speaking on the red carpet, Carter said that it was a no brainer to get involved in the project; “There were so many towns that people didn’t know about, so to bring interesting stories to the big screen, and also educate, any time you can do that is just a blessing.”

While the film doesn’t feel overtly political, you can’t escape the fact that it’s very existence is a force for change and equality. Here we have one of those very rare things that doesn’t happen often - the film is truly a genre-defying, no, a genre-reimagining, piece of cinema that will surely go down in the history books. Although there is still much to do, and as Elba said on the night of the screening, “I’ll be happy when we can stop calling it a ‘black’ western and just call it a ‘western.’"