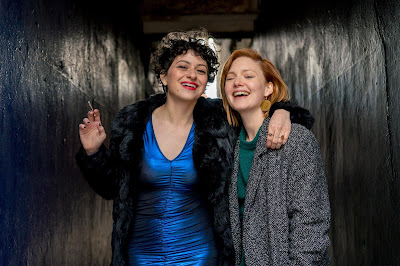 I'll start with a disclaimer - I was too late to buy tickets to see Animals at London's Sundance festival last year and was more than disappointed. I then didn't catch it's small theatrical release in the city a few months later... life just got in the way, I guess. I am fortunate, then, that this indie flick was added to Amazon Prime recently, and I finally got the chance to catch it. Thank you, film gods.

Animals follows two best friends, Laura (Holliday Granger) and Tyler (Alia Shawkat) as they navigate turning their thirties, facing societal pressures to 'grow up' and, when Laura meets the intriguing, talented pianist (Fra Fee), their friendship is put to the test for the first time. They live, breathe and party together - wanting to 'experience' life rather than just 'live' it.

There's a very telling line delivered by the enigmatic Tyler (a pitch perfect Shawkat) when they visit Laura's sister and her new baby that sums up the tone, 'Do you hear that? It's the non-sound of the suburbs.'

As well as an outstanding, spirited female-centric cast, the film was written by the incredibly talented Emma Jane Unsworth and directed by Sophie Hyde. As a result, it's a telling film to watch as a female - especially if you've had to navigate the inevitable change in friendships that come with growing older. It's unnerving because the feelings, the frustrations, the preoccupations that come with a strong friendship - a love-ship, as I like to call them, are truly represented in the film. Perhaps more so than any other I've ever seen.

Granger is magnificent as Laura. Not as self-possessed as Tyler, she is frustratingly impressionable and hapless. If we judge Laura on how well she's doing in her life, we would probably say that she's a 'hot mess.' She mentions that she's a barista, she takes too many drugs, she drinks white wine in most of her scenes and she wants to be a writer but suffers from writers block. She realises early in the film that she's been writing her novel for ten years but only has a few pages to show for it. Personally, it hit painfully home.

Frustrations, delirious happiness, exhaustion. The film spins us through an average few months in her life; we struggle to keep up. When is it time to get off the merry-go-round and start to look after yourself and live the kind of life you want to? Laura tries to navigate this throughout the film, leaning on her bestie, leaning on her new love interest, leaning on drugs. It's not an easy thing is it, to learn how to live with yourself?

The film is striking in it's unique voice, it's tone and it's depiction of a female friendship and I'm going to recommend it to all of my ladies. Well worth the wait.